The Next Drowners Video May Just Involve a Group Whiskey Bath

With catchy pop songs, fun-loving attitudes, and a trail of models constantly following them around, if Drowners isn’t the hippest band in New York City, then they’re certainly in the running.
END_OF_DOCUMENT_TOKEN_TO_BE_REPLACED

Ready For a Shamanic Odyssey? This Film About Ayahuasca Should Do the Trick

Rak Razam’s ayahuasca-themed film, Aya: Awakenings, was scheduled to premiere at 7 p.m. last night, but at 7:20 p.m., people were still filing into Anthology Film Archives. The audience members, who were all chatting with one another, were operating on their own time. As one woman squeezed her way through the narrow aisle, she stopped to ask a fellow attendee, “Didn’t we meet at the yoga retreat?”
END_OF_DOCUMENT_TOKEN_TO_BE_REPLACED

I woke up to a text from photographer Brianna Capozzi asking if I could fill in for an agency model who didn’t show up to set. After telling her I was free to shoot, I received a photograph of a guy with shaggy hair in his face and was told I would have to make out with him. I was apprehensive. I don’t often enjoy sticking my tongue in a random stranger’s mouth while a roomful of people watch, but it was for a fashion spread in a magazine of which I’m a fan, so I obliged.
END_OF_DOCUMENT_TOKEN_TO_BE_REPLACED

If you give a mouse a cookie, he’s going to ask for a glass of milk, and if you bitch about Dunkin’ Donuts in Williamsburg, they’re going to not care and instead keep opening more locations. Just a month after the opening of their widely bemoaned Bedford Ave. store, the popular (and not so popular) doughnut chain has started renovation on a new location directly off the Metropolitan L. Signage for the forthcoming shop has gone up at 527 Metropolitan Ave, former home to the charmingly sketchy Subway Bar.

While outrage over the new location has yet to start, it’s a safe bet that locals will most certainly not be coolatta about this.

Comic enthusiasts gathered in Williamsburg this past weekend for the first annual Comic Arts Brooklyn, which turned out to be the hippest comic festival ever – well, depending on your definition of hip. (Let’s face it, everyone enjoys a good Prince Robot IV costume from time to time.) The gathering of laid-back and stylish artist types seemed more like a mixer for Brooklyn’s coolest creatives than a comic convention.
END_OF_DOCUMENT_TOKEN_TO_BE_REPLACED 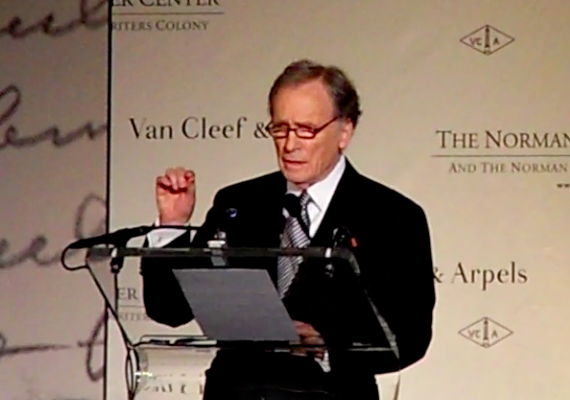 What, you thought Tom Wolfe was the only literary lion we roll with?

Last night, The Norman Mailer Center and Writers Colony held its fifth annual gala at the New York Public Library; B+B was there along with the Mailer family, a long list of well-respected writers, and some pleasant surprises like John Waters, Tony Bennett, and Coco Rocha. (For better or worse Courtney Love, who was supposed to be Steven Klein’s date, was a no-show.)
END_OF_DOCUMENT_TOKEN_TO_BE_REPLACED

Last night, Barclays Center was filled with a mixture of middle-aged South Africans and twentysomething Williamsburg artist types, all there to catch a glimpse of Sixto Rodriguez, star of Searching for Sugar Man. For those who haven’t seen the Oscar-winning documentary, the back story of Rodriguez is pretty unreal; it’s like something straight out of, well, an Oscar-winning documentary. Basically, the Mexican-American guitarist had a short-lived musical career in the ’70s, but bootlegs of his albums made their way to South Africa where, unbeknownst to him, he became a legend. All the while, he was working manual labor jobs in Detroit. Now, thanks to the success of Searching for Sugar Man, at 71, Rodriguez is suddenly playing stadiums such as Barclays Center, and a sold-out Radio City Music Hall.
END_OF_DOCUMENT_TOKEN_TO_BE_REPLACED

“The Cult Records thing is my fourth record deal, but it’s the coolest one for me,” James Levy told B+B on his band Reputante signing to the Julian Casablancas-owned label. “The label is an interesting community and I wanted to be a part of Julian’s vision. Everybody on it is part of the family to some degree. I was tired of signing record deals and not being excited about it.”
END_OF_DOCUMENT_TOKEN_TO_BE_REPLACED

Watts and Gaffigan, But No Acid-Laced Gummy Bears at Bell House Last Night

As audience members filed into the Heart of Darkness variety show at the Bell House last night, they were handed a vegan gummy bear stuffed in a cocaine baggy, and told that one of the sugary snacks was laced with acid.
END_OF_DOCUMENT_TOKEN_TO_BE_REPLACED

Happy Friday the 13th! Here’s the Line For $13 Tattoos in Williamsburg